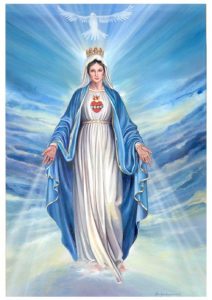 Q: What is the Legion of Mary?

A: The Legion of Mary is the largest and most widespread lay organizations of the Catholic Church1. It has both a strong spiritual and apostolic orientation. Its declared purpose is the sanctification of its members through prayer and active cooperation in the work of Mary and the Church to promote the reign of God in this world. The basis for its spirituality is Louis Grignion de Montfort’s treatise on True Devotion to the Blessed Virgin Mary and the reality of the Church as Mystical Body. Founded in Dublin, Ireland in 1921 by Frank Duff and a group of dedicated lay people it puts its resources at the service of the Church’s apostolate and espouses all forms of Catholic Action (except the collection of money). Probably the most typical and also the most effective means of the legionary’s apostolate are the home visits to encourage people to grow at least one step closer to God in whatever way is appropriate for that individual at that time. It has a highly structured organization and reflects patterns of Roman military organization bearing Latin appellations. The smallest local unit is called a praesidium, with several praesidia organized to form a governing council, with the lowest council being a curia. Various praesidia are attached directely to every level of governing council, from the lowest curia as well as regional and national councils called a regia or senatus, all the way to the supreme, world-wide government called the Concilium. According to Duff “the essential idea of the Legion is that of working in union with and in dependence on Mary, its Queen.” Annually, in a personal act made at a religious ceremony called the Acies, the legionary renews his consecration to Mary. In this consecration he/she expresses union with and dependence on Mary. Legionaries are required to faithfully practice their Catholic religion; be active members and attend a weekly meeting for group prayer, planning, reporting, and spiritual guidance, as well as pray daily and give some time each week to a definite apostolic work usually assigned in pairs, of at least two hours a week for members over age eighteen and one hour a week for members under eighteen. Auxiliary members pray five decades of the Rosary and the Legion prayer card daily.

Q: What is the purpose of the Legion of Mary? 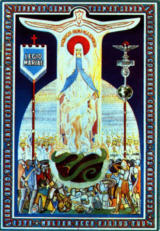