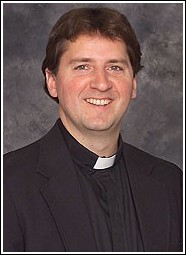 Father Francis J. Peffley was born March 16, 1963 in Norristown, Pennsylvania to William and Mary Peffley, who met in the Legion of Mary. He joined the Legion of Mary at the age of ten along with his sisters, Edel and Natia. He graduated from Christendom College in Front Royal, Virginia with a Bachelor of Arts in Theology. Father Peffley attended Mount Saint Mary’s Seminary in Emmitsburg, Maryland where he received his priestly formation and his Master of Divinity and Master of Arts Degrees. He was ordained to the priesthood for the Diocese of Arlington, Virginia on May 19, 1990. Father Peffley served as founding pastor of Holy Trinity parish in Gainesville, Virginia from 2001 to 2011 as Spiritual Director to eight praesidia and pastor to over 4,000 families in a vibrant and rapidly growing community, with 65 other ministries and organizations. Father then went to serve as parochial vicar at Saint John the Apostle in Leesburg, Virginia until 2016 and currently serves as parochial vicar at St Mary of Sorrows in Fairfax, Virginia.

In order to examine Mary’s place in the mission of the Holy Spirit, we should first look at Mary’s relationship to the Holy Spirit.  It is essential that this be understood if evangelization and the conversion of the world are to become realities for us, for these require extraordinary powers: the working of the Holy Spirit and Our Lady.  I will draw especially from two 20th century writers, St. Maximilian Kolbe and Frank Duff.

A look at the apostles before and after Pentecost reveals ordinary weak fishermen transformed during nine days of prayer with Our Lady in the Cenacle into dynamic disciples — for the Holy Spirit came down upon them and they went out to preach; 3,000, we recall, were converted that very day.

It is the same Mary and the same Holy Spirit who were in the upper room that are with us today.  If we are living in the presence of Mary, and asking the Holy Spirit for His power, should not those mass conversions which took place in the early Church take place again today?  We do hear of great numbers of conversions taking place now in South Korea, the Philippines and Africa through the Legion of Mary — an organization which operates under the auspices of Mary and the Holy Spirit.  When the Legion began in South Korea in the 1940’s there were only 300,000 Catholics.  In the 1980s there were 2,500,000 Catholics.  By the year 2000, there will be 3,000,000.  The Bishops of that country have said that the Legion of Mary is responsible for 80% of those conversions through their door-to-door visitations.  Should we not also hope and expect similar results in our own country?

To do this we need to come to know better the Holy Spirit and Our Lady and to see the intimate union which exists between these two persons — one Divine, the other human.  It is a matter of great importance because every grace, virtue and supernatural gift, which Christ merited, is given to us by Mary and the Holy Spirit.

Frank Duff, the founder of the Legion of Mary, said that each day we should try to come into contact with each person of the Blessed Trinity through prayer.  It means that each day in our prayer life we should converse individually with God the Father, God the Son and God the Holy Spirit.  They are One God, yet three Divine Persons.  We should come to know each of those Persons intimately, for God willing, we’ll be living in eternity with Them.  Obviously, the more we come to know Them now the greater our love and appreciation for Them will be in Heaven.

It is probably the easiest to pray to Our Lord since we know more about Him through scripture and tradition, and of the Three Persons perhaps we pray to Him best, especially in Holy Communion and in visits to the Blessed Sacrament. Regarding the Father, the four Eucharistic prayers in the Mass are addressed to Him by the Church which is Christ’s presence on earth.  And we say the Our Father in every Mass, in every recitation of the Rosary and other devotions.  But does the Holy Spirit receive as much attention as He could be given?  We do have novenas, hymns, and prayers to the Holy Spirit and entire prayer groups devoted to Him, but in many ways, He is still “the forgotten paraclete.” He seems to be in the shadows, and perhaps that is because of the type of image we have of Him in our mind.  Frank Duff said that we cannot pray in a vacuum — we need to understand to Whom we are praying and address that Person by name. To individualize the Persons of the Blessed Trinity in our prayer, it is helpful to have in our minds as suitable an image of the Divine Persons as possible.  It is not good enough to picture the Trinity as a luminous triangle with rays of light coming from it or as a big “eye” looking down over the world. Neither of these images evoke much love on our part for our Creator.

Perhaps the epitome of our image of God the Father comes from Michelangelo’s masterpiece which graces the ceiling of the Sistine Chapel in Rome.  But even this falls infinitely short of that exquisitely beautiful Being of goodness and power Who loves us beyond all imaginings yet Who calls Himself our Father.  With the Second Divine Person things come a bit easier since He took flesh and dwelled among us.  Christian art down through the centuries

has shown us what Christ may have looked like.  Since He was the Second person of the Trinity, we are privileged to get some glimpse of how God the Son appeared in human form.

But when we consider the Person of the Holy Spirit a difficulty arises. The images of the dove, tongues of fire and a great wind are all scripture has provided.  These are true symbols of the Holy Spirit, but do they evoke in us a personal response in prayer and the love which we should have for the Third Divine Person?

It is here, we find Mary’s place.  Mary was brought into an intimate relationship with the Blessed Trinity.  As you know, her relationship with the Three Divine Persons is entirely unique and eternally different from that of any other human being.  She was the daughter of God the Father, Mother of Jesus Christ, and true spouse of the Holy Spirit.  Next to Christ, she supplies the most accurate image of the Holy Spirit.

To see Mary in her relationship to the Trinity we must first turn to the dogma of her Immaculate Conception, which states that from the first moment of her existence Mary was preserved from the taint of original sin due to the foreseen merits of Christ.  Maximilian Kolbe said that it was at the moment of her Immaculate Conception that the Holy Spirit united Himself to Our Lady in a close and intimate union.

The union of Mary and the Holy Spirit begins at Mary’s conception but continues to intensify throughout her life.  Almost every time in the infancy narratives that she is mentioned the Holy Spirit is there to be found.  At the Annunciation, the Holy Spirit comes down upon Mary.  When she visits her cousin, the Holy Spirit inspires Elizabeth to proclaim to Mary “Blessed are you among women.” In the Presentation in the Temple, it is the Holy Spirit who inspires Simeon to come to the temple to see the Christ-child.  At Pentecost also, Mary is gathered with the Apostles as the Holy Spirit descends upon each of them.

So, this Divine-human relationship grew throughout her life, intensifying with the passing of Mary’s earthly years.  Maximilian Kolbe says that her Immaculate Conception was Mary’s preparation for her becoming the Mother of Jesus Christ. It would certainly be against right reason to think that the All-Pure God, the Second Person of the Trinity could take flesh in a woman who was tainted by sin.  God prepared Mary in her conception that He might one day be born of her in time.  Bishop Sheen said, “if any man would pre-exist his own mother he would certainly make her the most beautiful and grace-filled mother possible.”  In God’s case, He did pre-exist His mother and made her the most beautiful and immaculate creature ever to live — His greatest masterpiece.

The story is told of a sculptor who had just finished a beautiful work of art and invited a friend of his into his workshop to see it.  But the friend ignored the work of art and instead just talked to the artist.  Because he had spent so much time and effort putting his inspiration into stone, the artist was insulted.  And in a sense, this is applicable to God who created Our Lady as his greatest masterpiece.  When people ignore her or don’t honor her it is like not telling an artist “You created a thing of beauty.”

We can look at God’s actions as they are in Himself, the ad intra operations, namely the relation of the Father to the Son, the Son to the Father, etc., or God’s actions outside the Trinity (i.e., the ad extra operations) — for example God’s dealings with us in the Incarnation and Redemption.

As you are aware, there are two processions in God.  The first is God the Father eternally begetting the Son.  The second is the love between the Father and Son eternally bringing forth the Holy Spirit.  The word that the Church uses for this second procession is “spirit”.  The infinite love between the Father and the Son eternally spirates the Third Divine Person — the Holy Spirit.  It is important to understand this because Maximilian Kolbe calls this spiration “the eternal Immaculate Conception.” This terminology has not been used before in the tradition of the Church as far as we know, so it is a great contribution to theology.  If we see the Holy Spirit as the uncreated Immaculate Conception (the love between the Father and the Son) then it gives us an insight into why Mary at Lourdes would call herself “the Immaculate Conception”: she was calling herself by the name of her Spouse.

We are forced, whenever speaking of God to use human terminology which makes it difficult.  Even when we say that the Father generates the Son from all eternity, we are attributing the human idea of generation to the Father.  What Maximilian Kolbe does is to apply the human idea of conception to the spiration of the Holy Spirit from the Father and Son.  Kolbe does not want to fall into error, and so he stresses that this “conception” is eternal and uncreated.